It was a busy weekend of meeting new strangers and spending time with family and friends. I was asked by my daughters if I wanted to help with some volunteering at a local organization called Uplift KC. They bring food and supplies to the homeless of Kansas City. Seeing how we just purchased a house that had a bunch of clothes that was left behind. This was perfect timing. Below is a picture of some of the girls filling little bags of aspirin. I had the pleasure of doing some of the heavy lifting. This is what happens when you are perceived to be in good shape and look like you can lift a sack of 50lb potatoes with out much of a struggle. No, there were no potatoes to lift. Just moving boxes from here to there. To some this may seem trivial but they are some of the things that are needed to keep the operation moving. You can not always be on the front line. The support role is a huge void that always needs filled. Uplift was doing a great job in organizing, keeping the place looking great and taking care of our homeless population. I have seen the vans around town handing out food and clothes. I didn’t realize that they are a pretty lean operation and currently have 3 vans. I met several of the ladies there and promised that I will be back with more supplies and help with any heavy lifting they need. Find an organization near you and and go meet some pretty cool strangers. You never know where it will take you. 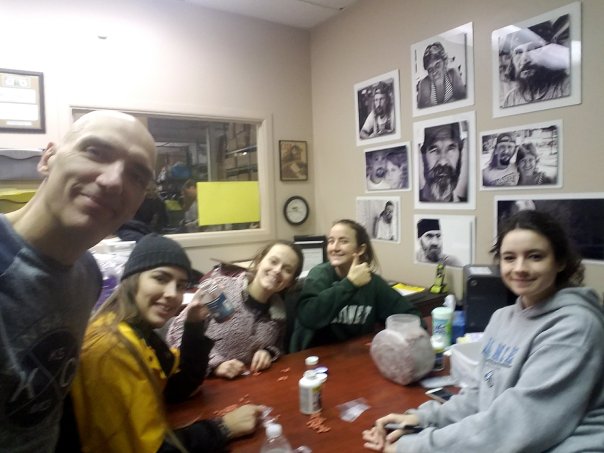 After volunteering I headed out to help re-build a deck with Tom G and Alain. Tom and I have known each other for some time, all of our kids went to school together and he and his wife are awesome. Alain is one of our contractors and has been in the states for about a year. He is originally from Cameroon, when he got to Kansas City I worked with him to get all of his stuff together and some medical help. He also stayed with me for a few months. I am also helping him send a container over to Africa and we will be going there in February to receive it. That will be a fun blog to write. Below is Tom, Alain and I. these are very good men that I completely trust and have faith in. If I was ever to need anything at anytime, I know they would be there. 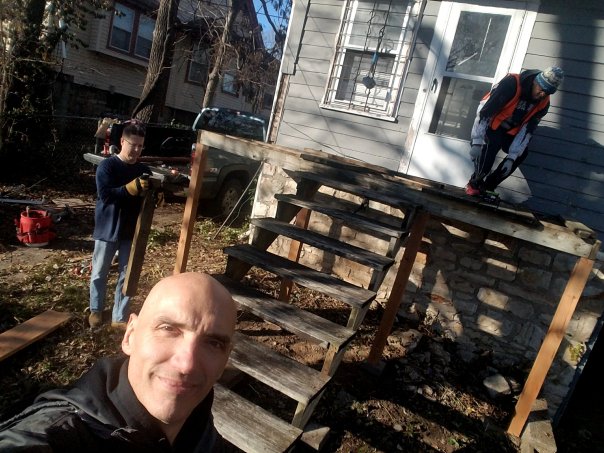 Sunday, was race day and it was the category state championship race. I was, once again going to do two races. The 40+ master and the single speed race. I had Volker bikes put together a single speed out of my pit bike. This race was put on by 360 racing and is always a great race in Lawrence KS. In the masters race there is a very strong racer that I am always chasing. His name is Damian Almanza and he has beat me 8 out of the last 8 races:) Actually, Make that 9. Yes, once again he took the top step of the podium. I did get to hang out with him after the race. It was nice to get to know him a little better. I have to admit, I was feeling him out on his road race interest. I would love to have an athlete like him on our road race team.  I also got to race with Mark, Kyle and Kenny with KCBC. Of course I got to hang with Marco, Haley, Maryanne and Clymer. It is so much fun hanging out at a race and getting to know everyone. 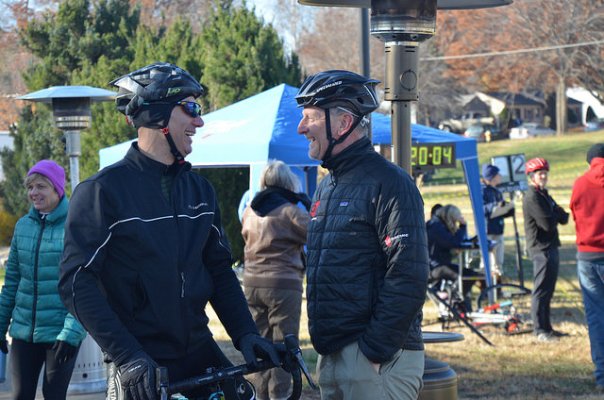 My favorite youth to watch. This is Franklin. Watch out for this kid on the pro tour! 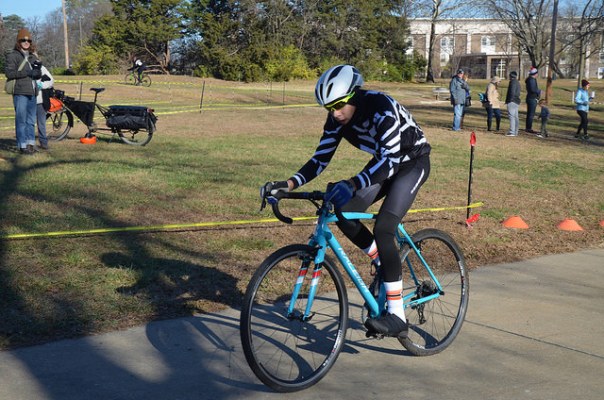 Below is a pic of Damian and I. Every time I see Jesse getting ready to take a picture I try to strike a pose:) This was my super hero pose. It was tough not to laugh. 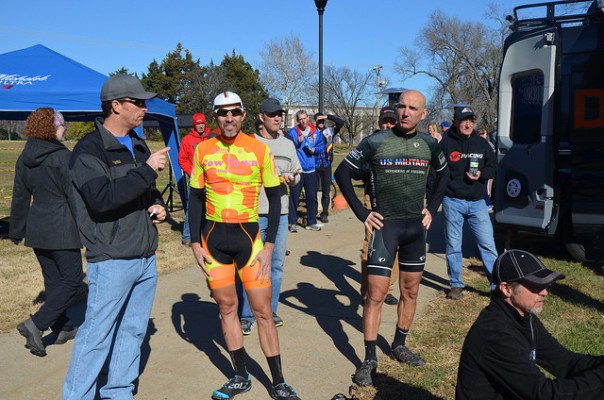 Just before my second race I got to get into some compression equipment. There is a new Cryo salon in Lawrence. Thank you Optimal wellness and cryo spa 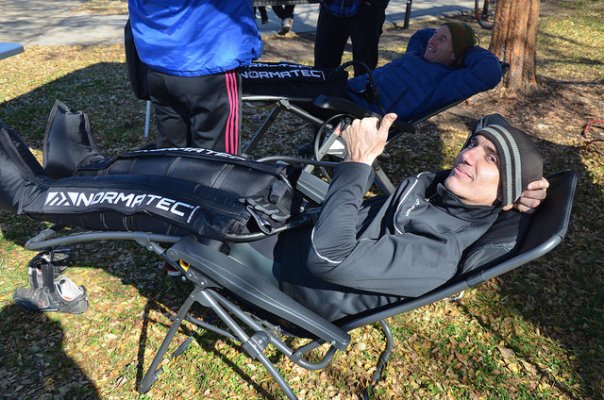 Here is after the race at the pig in Lawrence with Clymer and Maryanne. I think Clymer should ask her out:) They seem to be having a good conversation. 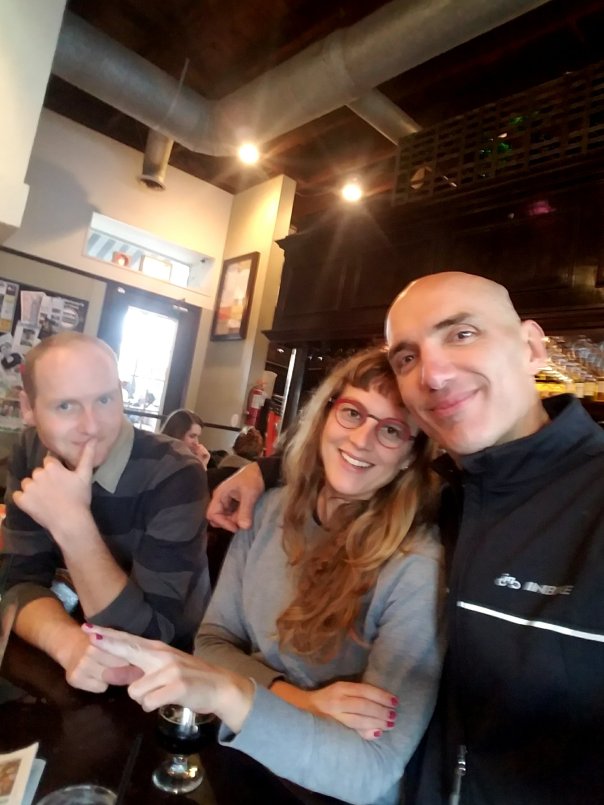 More suffering:) So I finished 5th and 7th. I will be re-gearing the single speed soon.  My quads still hurt. 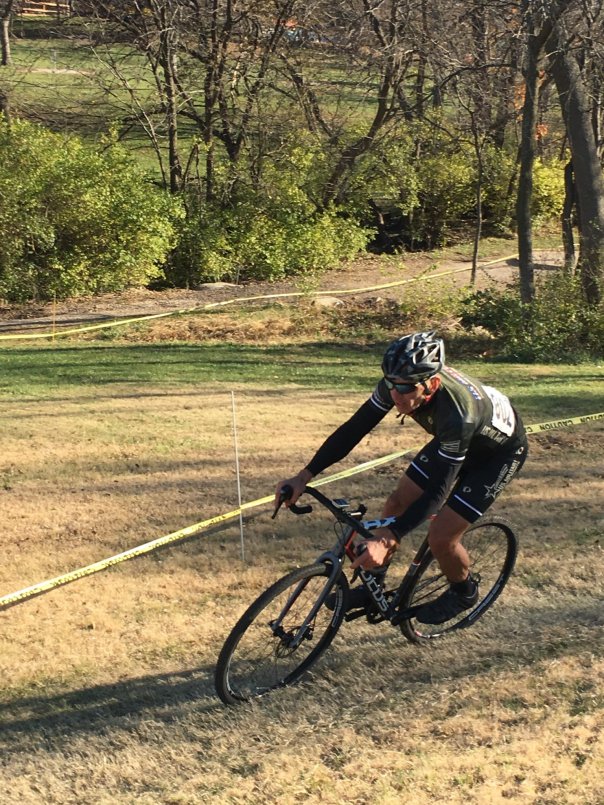 Thanks for reading and remember. Every friend you have today was once a stranger! So, go out and meet new strangers.