The Boulevard Cup 2017 was a bit chilly and windy but didn’t keep away the cyclocross fanatics. I swear if it was muddy or snowy there would be more racers out just to prove that they are tougher than their competition, myself included.

Below is a picture of me as i was dismounting before a run up and torqued my right knee. It was the same knee I whacked with my peddle just before the race began:(

Oh, and yes that is a new kit I am wearing. It is the”defenders of Freedom” jersey. The knee was fine. I just needed some ice and rest and all was well. Here is a better pic of the full kit.

It was a great course and I got to hang out once again with some really awesome athletes. Here is a pic of Dr. Rob. He also races with the U.S. Military team and was racing the 50+ masters race. He and I went to lunch after the race to catch up. He did the BWR training ride with me in San Diego last year and totally hooked me up when I got sick. Such a great guy. I look forward to hanging out more with him. He is a strong gravel rider and a beast on the road. 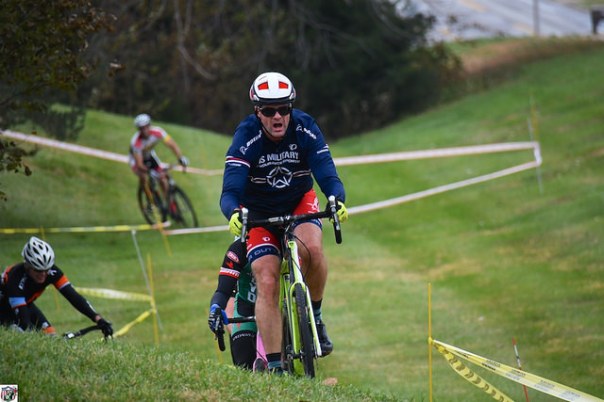 Of course no race would be the same if I didn’t get a picture with Maryanne. I like hanging out with her. Such a great demeanor. It will be my goal to get a pic with her after every race:) She says that if a guy ask her out on a date she always says yes. I think that is the best way to know what you like and don’t like. Good for you MM!

I also ran into a new racer from Maryland. I met him about 3 weeks ago at the Joules Cross race. His name is Clymer and he came out to race after being out of it for several years. I was proud of that dude! He just showed up and we started talking. That is the whole point of my blog. Meeting new strangers, right? Sorry, no pics of Clymer.

As always, go out and make some new strangers. Thank you for reading.