Whether you race or ride your bike. It is a great way to meet new people. This weekend there were a ton of folks riding and racing their bike. Me? I truly enjoy the freedom of being on a bike. This weekend was no different. I wish I could have been a part of the awesome event that was put on by Cycling Kansas City. The Cider Mill century was enjoyed by 385 men, women and children. To put on a ride like that takes a bunch of volunteers and the CKC board. Thank you to all those that participated and took time out of their day to help. The next ride is the Summer Breeze on 8.26.2018 and I hope to see everyone out for this event.

This weekend had so many options on the race/ride calendar. I, however, committed to racing in Arkansas at the Natural State crits. Along with KCBC teammate Kyle Guinn. We roomed with Connor and Ian from Moveup and Alex from Colavita. 3 days of crit racing at its finest. It started with Friday night under the lights and it was .6 of a mile, 6 turn short course. If you were not on the front line, you were left behind. Ian Pepin was our main focus for this race but he ended up on the back row. Alex Flunker and I worked to stay with the front pack. We also had Thomas Lewin from the KC team Grip n Rip join in the fun. I ended up getting caught behind a crash in the middle of the race, then again later in the race and took me all but out of the race. By the end of the 1st race Thomas took 7th, Alex 9th, Ian 17th and I was in 12th. The only female to race from KC was Molly Benton (Elektra racing). Molly took the course with 56 other pro123 women. This was a really tough field and Molly (cat3) took it on the chin like a champ and ended her race in 50th. I’m proud of that lady for stepping in the ring with the pros. Our Cat3 men had Tim Jansen (AKA Jan Timson) of GP Velotek and Kyle Guinn from KCBC. These boys averaged 25+ miles an hour and Jansen came away in the money with a 6th place finish. These tight turns did not favor the time trial champion and Kyle landed in 28th.

Saturday in the town of Rogers AR, The KC area represented with 16 athletes, 10 of the 16 were the women of the KC. All of these ladies raced in the 3 4 5 womans race. This race had 30 women in it. I would have loved to see more teamwork between the 3 teams from KC that were represented. Amy Cottrell took 6th, Kelly Skinner 10th both from Elektra racing and were in the money. Grip n rip showed up with 4 women, GP Velotek fieled 2 and 4 from Elektra. There was a total of 30 women in the race. Velotek, Elektra, KCBC, Colavita and Move up all set up base camp together on Saturday. I would have liked to have the Grip n Rip folks with us but we did not get to coordinate that to make it happen.

Our goal for the men cat4 was to get Ian on the podium. I figured if any course would favor him, it would be this one. We did what we could to keep him protected and he did all the work in the last 5 laps to get into position for the uphill sprint and he took 2nd. The kid that took 1st almost lapped the entire field but Ian kept that from happening. Time to upgrade Ian. Tom Lewin took 7th, Alex in the 8 spot and I was shot out the back and 18th.

The cat3 race had Tim Jansen working hard for a 3rd place field sprint finish. After the race I asked him what he was doing to get him to where his fitness was. He said he put this weekend as his A race and focused on what he needed to do to best put him in position to win. One hell of an effort. Our KCBC teammate worked hard to hold on to the 28 spot. Kyle had a moment where he took off and went for and won a prem. So, our man Kyle did not walk away with out any $$. After the race we invited the Velotek and Elektra team over for dinner and made a hell of a shrimp and pasta meal. The ladies brought over salad, wine and garlic bread. This is where we get to get out of our race kits and just sit around eat, drink, tell stories and just enjoy each others company. Here is a great photo of the ring leader of the evening. Kelly Skinner has a dynamic personality and was nice to have in the mix. The pictures pretty much tells the story.

I think the dinner was the best part of the weekend. We are all amateur athletes and all have to go to work on Monday. We love riding and that is the common bond we all share. We are human and sometimes we suck and other times we are amazing. I hope you don’t judge a human when they are having one of those days that they suck.

Day 3 of the Natural State was a much longer course with more turns than the other two races. The women kicked off the day with a morning race and all 10 of our KC women worked hard to get into position, only to get crashed out in the finale turn while a prem was at stake. Kelly, Sev Tournadre and Carol Stauffer were all but taken out of the race. Marianne Melling had a huge effort and took 5th place. Amy was in the money at 10th, Michelle Sheppard with elektra at 13th. I decided to double up and start the day with a masters race. I was feeling great and sitting in a top 10 position with 8 to go. Then we had a crash and the race had to be neutralized with 7 to go. The last 6 laps were fast and after 15 minutes of waiting in the sun we all were suffering and out of 29 racers, I sprinted for 12th place. Ugh, in 4 hours I get to do it again. Next up, Cat3 race and boy did it not disappoint. It was a battle of positions and Tim was in the money one more time at 10th and Kyle ended the weekend with a hard fought race at 31st.

There were other KCBC athletes out there racing. One of our mountian bikeracers, Michael Conley was racing in the Marmaton Massacre in Ft. Scott. Michael had a rough go at the race in the single speed category and ended up crashing out and breaking his helmet. Glad he was not seriously injured.

Last but not least was our Triathlete Iron Woman, Michelle Lingenfelser. Michelle took the top podium spot at the Big Shark New Town Tri. She also was 5th overall on the bike portion of the tri. That is 5th out of 215 men and women. WOW! Great Job Michelle. We are all very proud of you. By the way, 2nd place was a 15 year old! Don’t you just love it! 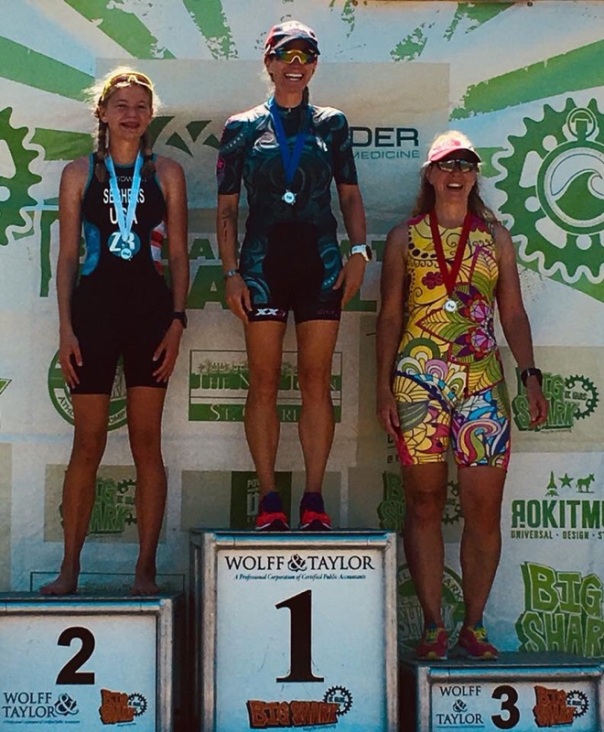 Thank you for reading. And remember, every friend you have today was once a stranger. Go out and meet new strangers. Even if they suck at first, they might just be having a case of the Mondays.